Virgin and Child in a Landscape 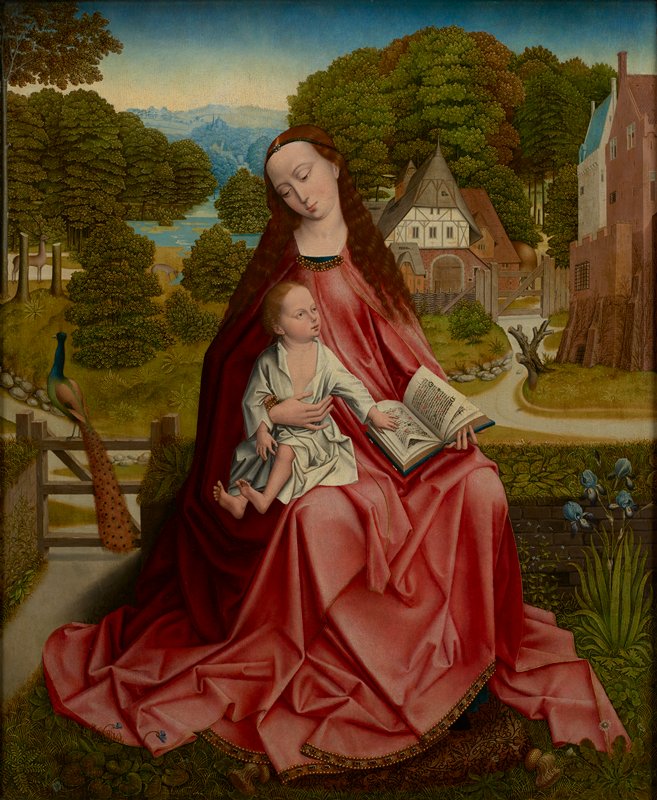 A woman sits outdoors, a child on her lap. Flowers bloom around them, and a tame peacock perches on the garden gate. The nearby buildings are typical of 15th-century Brabant, now a region of Belgium, where the artist lived. The mother smiles tenderly at her child as they turn the pages of a book. But is this an ordinary family in their garden?

If the woman stood up, she would tower over the landscape in her flowing red robe. The baby's solemn face suggests wisdom beyond his years. This woman is Mary, and the child in her lap is Jesus Christ. They sit before us, not high on a heavenly throne, but firmly on earthin your own backyard, if you lived in 15th-century Brabant.

The painting reminded churchgoers that in many ways Mary and Jesus were ordinary people like themselves. Yet the real-world details held religious meanings. The message for the believer: If God is in everything, then perhaps nothing is ordinary.

Images of Mary as a mother appealed to Christians in Europe in the late Middle Ages.

For centuries, holy figures were shown in Christian art as distant and otherworldly. They had golden halos and wore courtly robes in a heavenly kingdom far from the imperfect world on earth. Mary, the mother of Jesus, commonly appeared seated on a throne, as the Queen of Heaven.

During the Middle Ages, Mary became more important to Christians throughout Europe. Her motherly love comforted believers hoping for protection when God judged their sins. Hundreds of churches were built in Mary's honor, and artists developed new ways of picturing her. Often she was shown, not as a queen on a throne, but as the Madonna of Humility a humble woman seated on a bench or even the ground.

Artists had been painting Mary as the Madonna of Humility for almost a century when this picture was made. The theme probably began with painters in Italy, but the idea quickly spread to northern Europe. There, painters enriched their scenes with carefully observed features of the world around them. They brought Mary even closer to home. 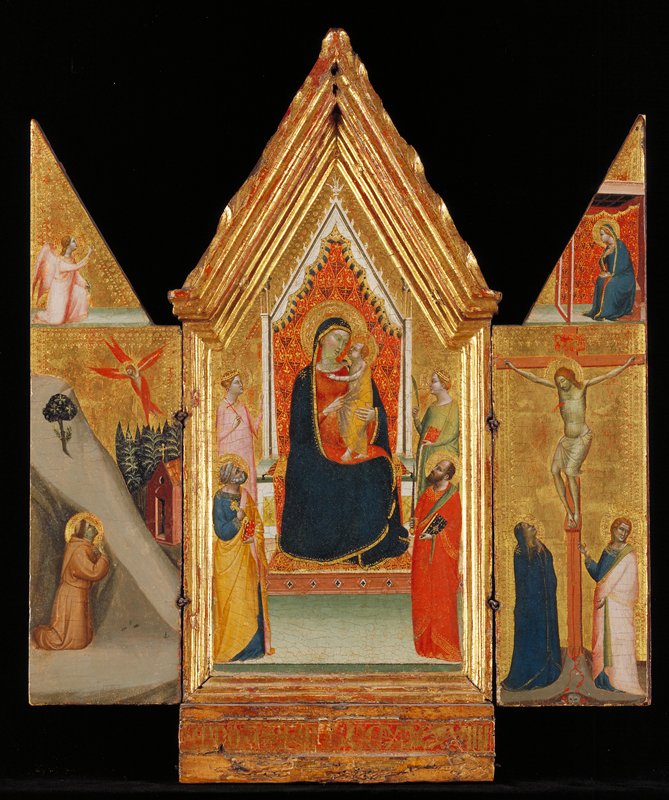 Here Mary is seated on a throne as the Queen of Heaven. Bernardo Daddi, Italian, Madonna and Child with Saints, 1339

The painting would probably have been part of a folding altarpiece. This similar painting, perhaps by the same artist, still has its side panels. Master of the Embroidered Foliage, Virgin and Child Surrounded by Angel Musicians (triptych), about 1500, Musée des Beaux-Arts, Lille

Artists in northern Europe perfected painting techniques that captured the look of the natural world.

About a century before this picture was painted, artists working in the Netherlands (which then included part of Belgium) perfected the technique of oil painting. They mixed their paints with linseed oil instead of traditional egg yolk. Because oil dries more slowly than egg yolk, painters could blend their colors to produce more lifelike effects.

Netherlandish artists put many details from nature and their own surroundings into their paintings. In this picture, for example, the artist included buildings made of brick, stone, and half-timbered plaster. You can see stone walls and picket fences and a fence made of woven branches. The garden is filled with plants that grow in the region.

Many of these details also had religious meanings that most people of the time understood. The blue iris, or sword lily, symbolized the sorrow that pierced Mary's heart when her son died. Blue violets, which grow close to the ground, stood for Mary's humility. The peacock on the gate symbolized immortality, because people thought its body did not decay. In the woods beyond the gate, the tall tree stumps refer to the wooden cross on which Christ was crucified.

All three images are unavailable

Tempera paint, mixed with egg yolk, does not allow smooth blending of colors because the paint dries too quickly. Segna di Buonaventura, Italian, Madonna and Child (detail), around 1310


The buildings are typical of a 15th-century Netherlandish town.

The blue iris, or sword lily, refers to Mary's sorrow.

The painter's name is unknown, but a comparison of similar pictures might tell something about him.

Artists rarely signed their paintings in 15th-century Europe. Scholars can sometimes use documents, such as records of payment, to link an artist's name to a group of pictures that seem to be by the same person. But often no such records exist.

In the 1920s a German art historian noticed a number of paintings, including this one, that might all be the work of the same artist. One clue was how the leaves were painted. Every leaf, near or far, appears sharp and clear. The effect reminded the scholar of embroidery, so he called the unknown painter the Master of the Embroidered Foliage. In several of these pictures Mary sits in the same pose, tilting her head to the side, and the Christ child's pose is also the same. Only the backgrounds are different.

These days, the tools of science can help show whether one person actually painted all the pictures. Scholars recently used X-ray photography and other techniques to examine four paintings thought to be by the Master of the Embroidered Foliage. They found important differences invisible to the eye. For example, one picture has branches under the leaves of the trees while another does not. Today, there are a couple of ideas about who the artists might be. This painting is possibly by the Master of the Madonna Grog, or Aert van den Bossche. The Master of the Embroidered Foliage, once believed to be the painter, was more likely a group of artists who used the same figures and compositions for a number of similar panel paintings.

But if the paintings are really by different artists, why do they look so much alike? In the 15th century, paintings were often made in workshops, where several artists had a hand in making a single picture. And it was common for workshops to share patterns for paintings. The figures of Mary and Christ appear to have been copied from a picture by the leading Netherlandish painter of the time, Rogier van der Weyden. Many people must have ordered versions of this picture, asking for slightly different details in the background.

This picture is nearly identical in composition. Master of the Embroidered Foliage, _Virgin and Child Surrounded by Angel Musicians_ (triptych), about 1500, Musée des Beaux-Arts, Lille

The poses of Mary and Jesus are the same, but a 15th-century Netherlandish city appears in the background. Master of the Embroidered Foliage, _Virgin and Child Enthroned_, about 1500, The Sterling and Francine Clark Art Institute

Here Mary and Jesus sit in a garden enclosed by a stone wall, and angels place a crown on Mary's head. Master of the Embroidered Foliage, _Virgin and Child Crowned by Two Angels_, about 1500, Stedelijke Musea Bruges, Groeningemuseum

Ordinary plants and animals had symbolic meaning for 15th-century Europeans. The violet, for example, stood for humility because it grows close to the ground. (See Key Idea 2.) Think of several common plants and animals in your world. Invent symbolic meanings for them based on their qualities. Then combine them to create a picture with hidden meaning. Can someone else decode your picture?

Europe in the Middle Ages

The painter shows us what a village looked like in the region in which he lived. What might life have been like there? Use the library to find out more about life in 15th-century Netherlands. Draw a new picture based on the background scene of this one to show what you have learned, and write a paragraph to explain what is happening in your picture.

Mothers have special importance in cultures around the world. Search Mia's website for images of mothers from around the world to compare and contrast. Which images seem to show a particular mother and child? Which seem to stand for qualities mothers represent? What do you see that makes you say that? Can one image do both?