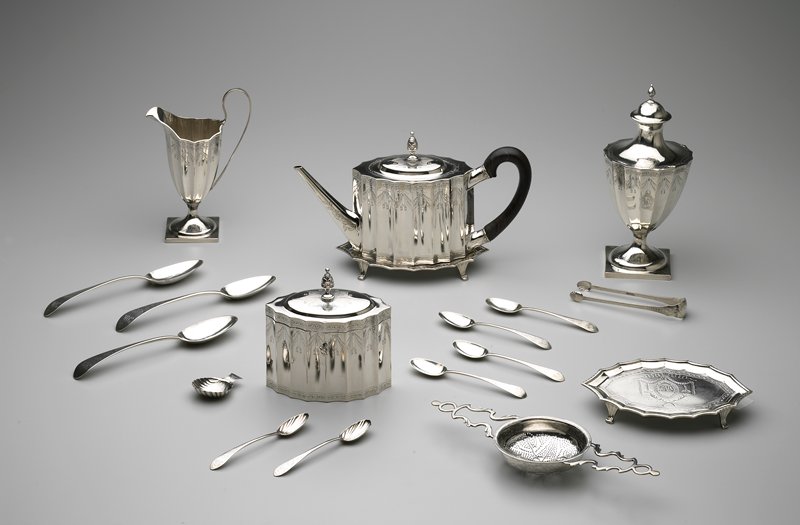 Paul Revere is famous for his patriotic midnight ride, in 1775. But did you know that he was also an artist? It's true! Paul Revere was a silversmith. He created beautiful and usable plates, bowls, teapots, spoons, and many other household items from silver. He is considered one of colonial America's most important silversmiths.

A man with a silver touch

Paul Revere was born in 1735 in the colonial town of Boston, Massachusetts. His father, a master craftsman, ran his own silversmith shop. Since most colonial boys followed their fathers trade, Paul Revere trained as a silversmith during his teenage years. But when Paul was just nineteen years old, his father died, leaving behind a large family. As the oldest son, Paul Revere was allowed to take over the shop, even though he wasnt legally old enough and hadnt finished his apprenticeship. He worked as a silversmith for forty years, becoming one of the most famous American silver artists.

Although Paul Revere made over five thousand silver objects, that was not the only work he did during his life. He cast church bells and cannons, engraved copper for printmaking, drew political cartoons, created and repaired jewelry, produced equipment for ships, ran a hardware store, designed false teeth, made surgeon's and dentist's tools, and even practiced some dentistry himself. Yet he remains best known for riding from Boston to Lexington, Massachusetts, at the start of the American Revolution, to warn that British troops were coming. 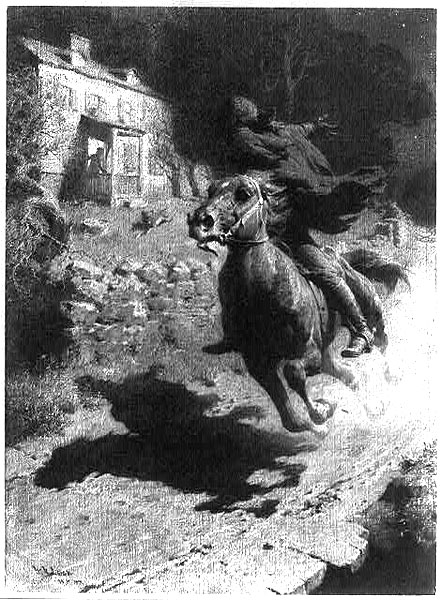 Paul Revere is best known for his famous midnight ride from Boston to Lexington at the beginning of the American Revolution. William Robinson Leigh, Awaken . . ., Library of Congress Prints and Photographs Division, Washington, D.C. 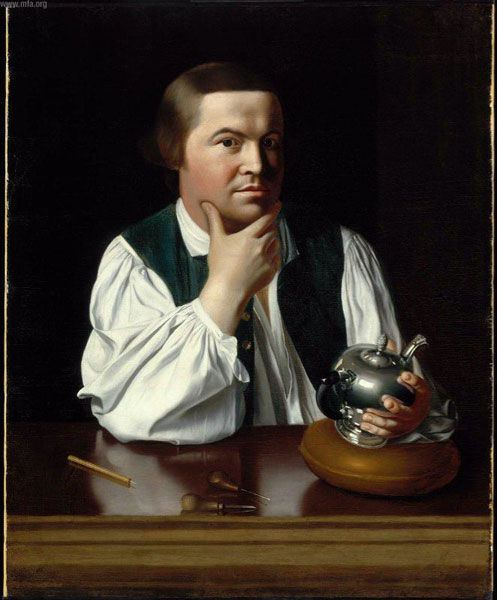 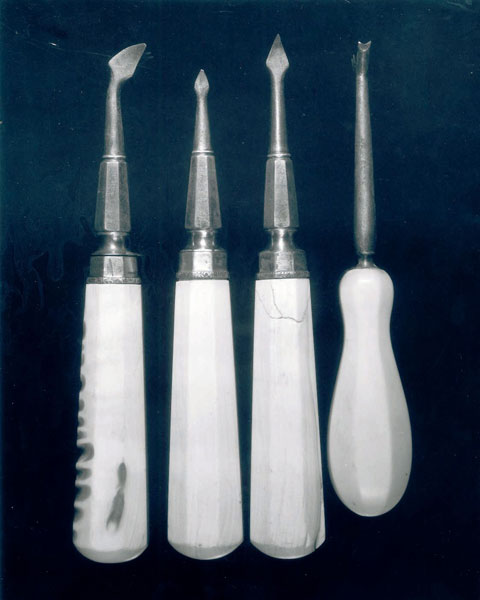 Silver is a very valuable metal, second only to gold. Throughout history silver has been linked with wealth and social status. It has been used as coin currency for trade, made into jewelry, and formed into special possessions for peoples homes, like this tea service. Paul Revere made this tea service for the wealthy Boston merchant John Templeman and his wife, Mehitable.

The Templemans were loyal customers and ordered many household items from Revere's shop. For such items, Revere often used coin silver. Making silver objects from melted coins was a common practice at that time. If later on the owner needed money, he could sell an object for the value of the silver it was made from or else have the silver melted down and sell the metal.

To create this tea service, Paul Revere used two different processes: forging and casting. In forging, the metal is hammered into the desired shape. To prevent cracks or breakage, the hammered silver must be annealed heated red hot and then slowly cooled. Revere used rolled sheet silver for the teapot, tea caddy, creamer, and sugar urn and their stands, which made it easier to form their straight edges. The casting process was used for the small feet on the teapot stand and caddy stand and the finials (tips) on the lids of the teapot, tea caddy, and sugar urn. Molten silver was poured into a mold made in the right shape. After the silver cooled and hardened, it was removed from the mold.

Silver objects could be decorated in various ways. The intricate designs on this tea set are engraved, or carved, into the metal. They include draped fabric and tassels and also the Templemans initials, JMT, in fancy script on the spoon handles and on the stands and sugar urn. Including the buyer's initials added beauty, made the owner proud, and also served as insurance. If the item was stolen, finding the owner would be easier. Revere signed his work by stamping (pressing) REVERE, his maker's mark, into the metal. 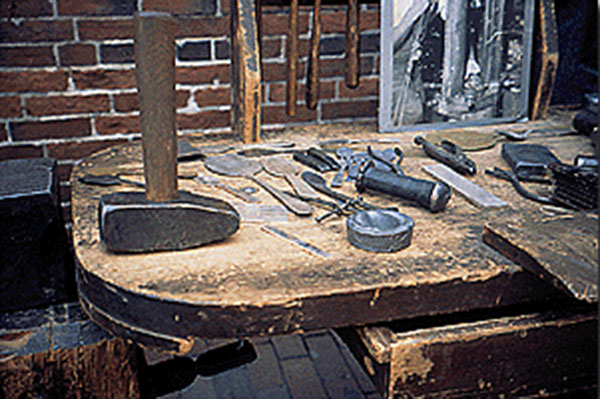 Tools such as these were used by silversmiths to craft delicate tableware. Silversmith's tools, courtesy the Paul Revere Memorial Association, Boston, Massachusetts

The tea caddy's straight edges were simpler to make with rolled sheet silver. The finial was cast in a mold and later attached to the lid. 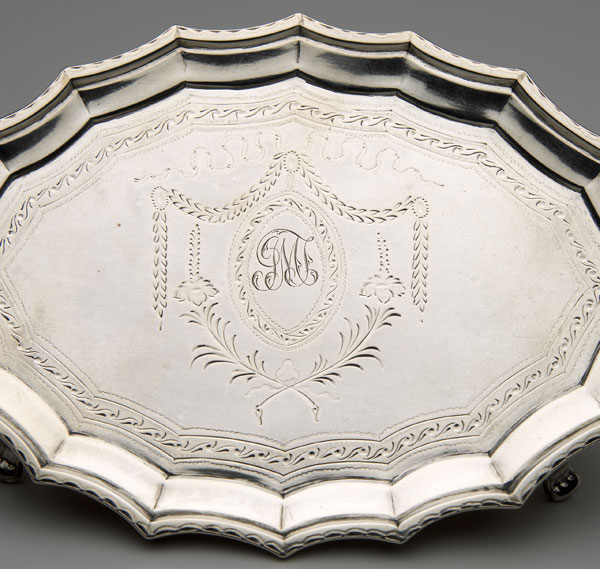 On this silver tray Paul Revere engraved the monogram of John and Mehitable Templeman, JMT.

The union of fashion and function

In colonial America, the average person lived a simple life. Yet people still looked back to England and around the world for little luxuries. From England and elsewhere, trendy products were exported to the colonies.

One fashion the colonists could not resist was tea. This hot drink, which originated in Asia, was introduced to Europe through trade in 1610 and then brought from England to America. The fascinating new beverage quickly became an essential delight. For women, especially, the social ceremony of meeting for tea became an important part of everyday life. The popularity of tea sweeping through the colonies brought a demand for special utensils and furnishings, particularly in upper-class homes. Objects designed specifically for preparing and serving tea included teapots, sugar urns, cream jugs, and spoons, and also tea tables.

Each piece in the tea service had its function. The teapot, on its stand, held hot water. The tea caddy, a lockable box, held loose tea, and there might be a tray on which to display the caddy. A matching pitcher for cream and a covered urn for sugar lumps are included in this set. A pair of sugar tongs was used for putting the sugar lumps in the teacups. The small shell-shaped scoop, which was kept inside the tea caddy, was used for measuring the tea. The teaspoons and tablespoons were used for stirring the tea as well as for mealtime eating. Also included in the Paul Revere set is a punch strainer. A beverage made of fruit, wine, water, sugar and spices, punch was served at festive evening gatherings.

Following the fashions of the day, Paul Revere designed this set in the federal style. Harking back to classical Greek and Roman architecture and sculpture, this style emphasized simple shapes, straight lines, and clean edges. The vertical lines on the larger serving pieces suggest the fluted columns on classical buildings, and the sugar urn has a classical urn shape. To create the engraved decoration, Revere carefully carved and cut into the silver. The repeating drapery and tassels also echo classical designs from Greek and Roman architecture. 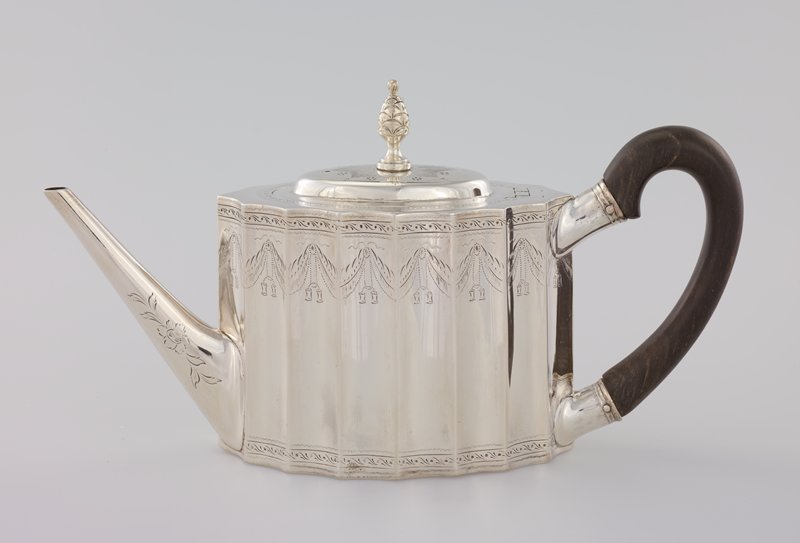 The teapot was designed in the federal style, with straight edges, simple engraved decoration, and a dark wood handle.

This little silver shell was used to measure tea leaves for brewing the popular beverage.

Try your hand at the art of silversmithing! Cover a paper plate, paper cup, or plastic spoon with a layer of tinfoil. Using a dull pencil or a blunt tool, draw gently on the tinfoil to create your own monogram, an intricate design composed of your initials.

Visit the home of Paul Revere by going to the Paul Revere House website. Read the biography section to learn more about the famous silversmith’s life. Find out about Revere’s family and the house he lived in. Present something you learned to a small group in your class.

A Day in the Life

Read the book A Day in the Life of a Colonial Silversmith, by Cathy Wilmore. How is life today different from life in colonial America? Would you like to have been a colonial silversmith?