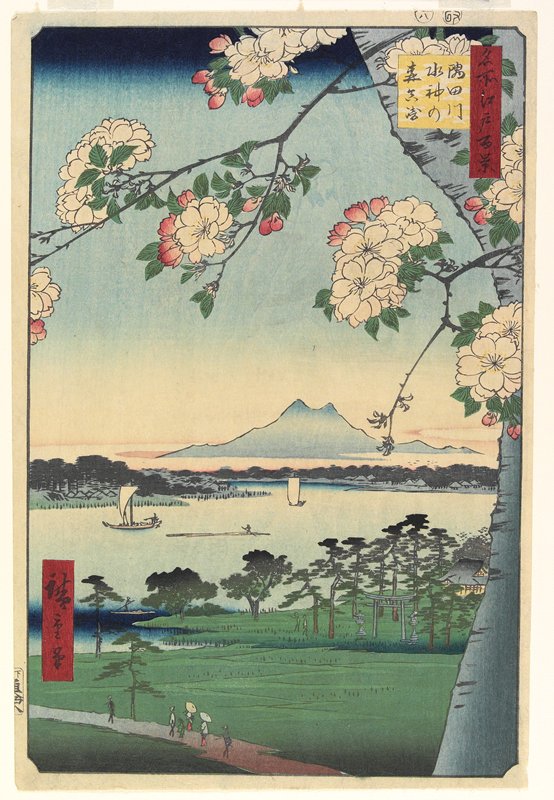 Once sold quite inexpensively, prints like this one by Ando Hiroshige were collected and enjoyed by common people. Little did Japanese print artists know that in later centuries their work would be appreciated and collected around the world. Ando Hiroshige Japanese (1797-1858) Suijin Grove and Masaki on the Sumida River, 1856 From the series One Hundred Famous Views of Edo Color woodblock print Minneapolis Institute of Art

Pictures of the Floating World

Enjoy life! That could have been the motto of Japanese commoners during the Edo period (1603 to 1867). Japan was peaceful and thriving at that time, but the Japanese government isolated the country from the rest of the world and controlled many aspects of peoples lives. People turned for entertainment to the theater, music, and art. Often they spent large sums of money just enjoying themselves. This world of pleasure was known as ukiyo, the floating world.

Many forms of Japanese art developed in the Edo period, including a distinctive type of print. Inexpensive, mass-produced pictures (first used to illustrate novels) became available to the common people. Meant to inspire and amuse, these prints became extremely popular. Such pictures were known as ukiyo-e (oo-kee-oh-ay), or pictures of the floating world. 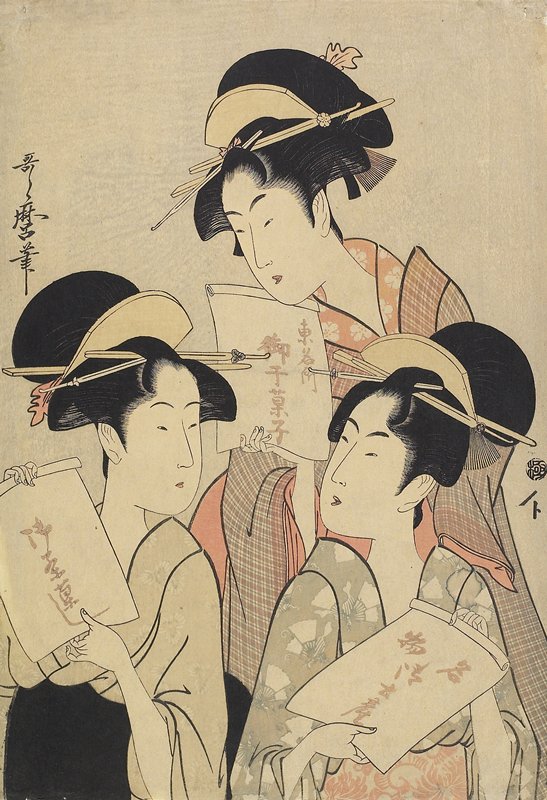 These young people are shown reading and writing. Literacy was high in the Edo period, and book printing was an important industry. Kitagawa Utamaro (Japanese, 1753-1806), Hour of the Ram, Young Girls, 1798-99 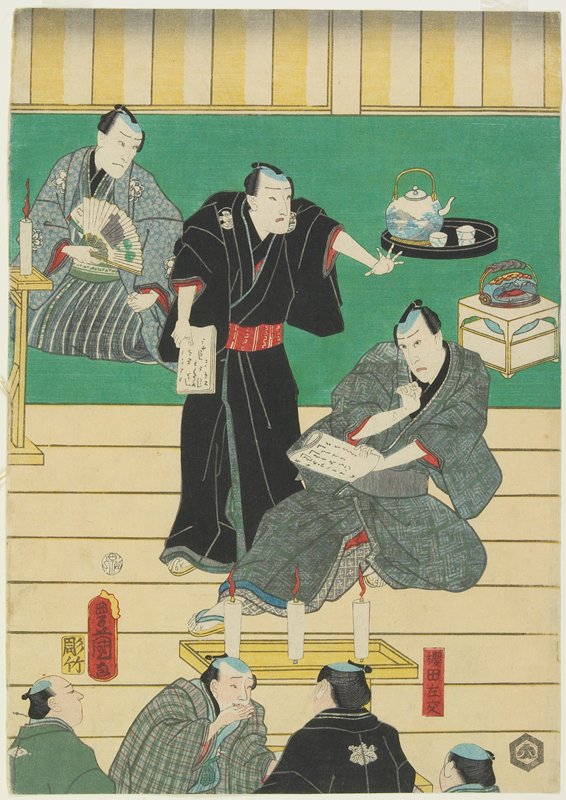 Theater was a popular amusement in Japan. Here, actors rehearse a scene from a Kabuki play. Utagawa Kunisada (Japanese, 1786-1865), Rehearsal of a Kabuki Play, 1860 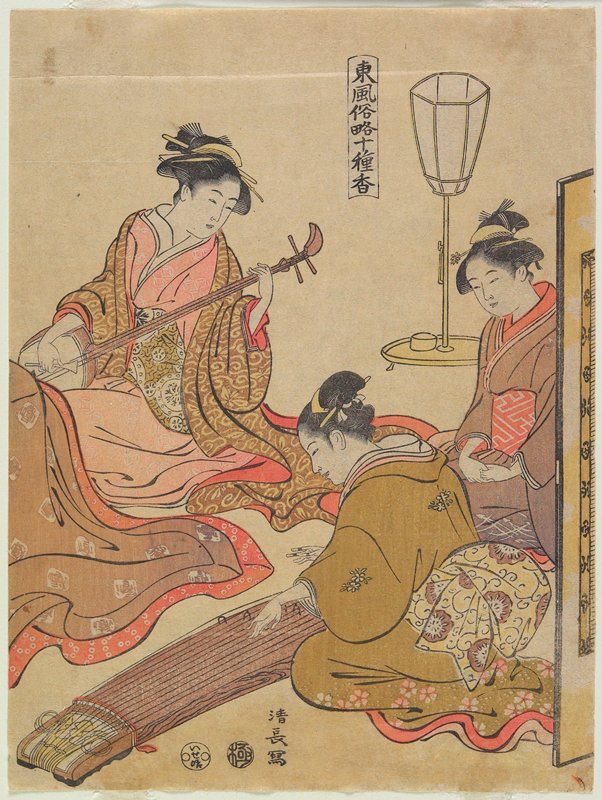 These three women are playing traditional Japanese instruments. The woman on the left plays a shamisen and the one in the center plays a koto. Torii Kiyonaga (Japanese, 1752-1815), Playing Instruments, 1794

An ukiyo-e print was the result of teamwork. An artist, a carver, a printer, and a publisher all contributed to creating the print.

First, the publisher envisioned a project and hired an artist to design the prints. The design drawn by the artist was glued to a block of cherry wood. A carver, using chisels, carefully cut away the wood, leaving the lines of the design standing up in relief. Next, the printer applied ink to the carved woodblock and placed paper on top of it. The ink was transferred to the paper by rubbing the paper with a smooth tool. When the paper was peeled away, the image appeared on it. After the ink dried the print was sold. If the project included many different prints, the publisher would collect them to make a book.

Early prints were black and white. Sometimes color was added by hand painting. As ukiyo-e developed, color became an important part of the printing process. For multicolored prints, a separate woodblock was carved for each color and also one for printing the main outline in black. As many as twenty blocks might be needed to complete a single picture. Images made by this process are called nishiki-e, or brocade pictures. Ukiyo-e prints were the first images ever printed in color! 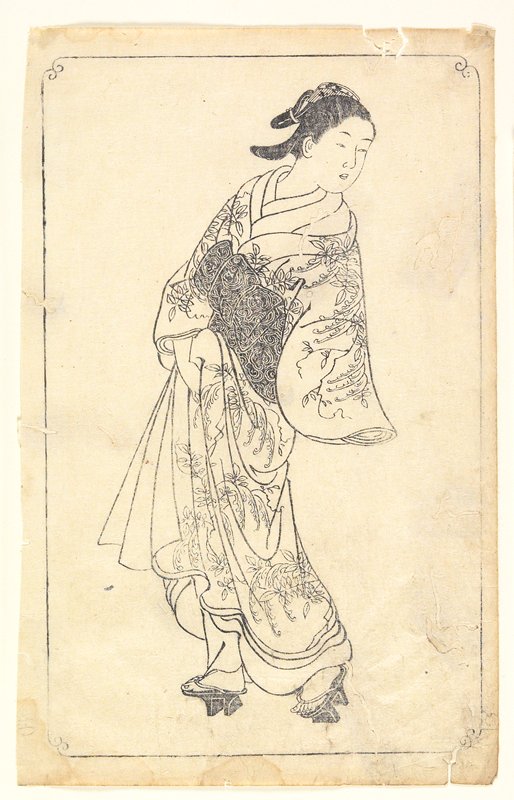 Early ukiyo-e prints, like this image of a woman, were made by carving a single outline block and printing it in black ink. Nishikawa Sukenobu (Japanese, 1671-1751), Courtesan Walking, 1739, from Picture Book: Asaka Mountain 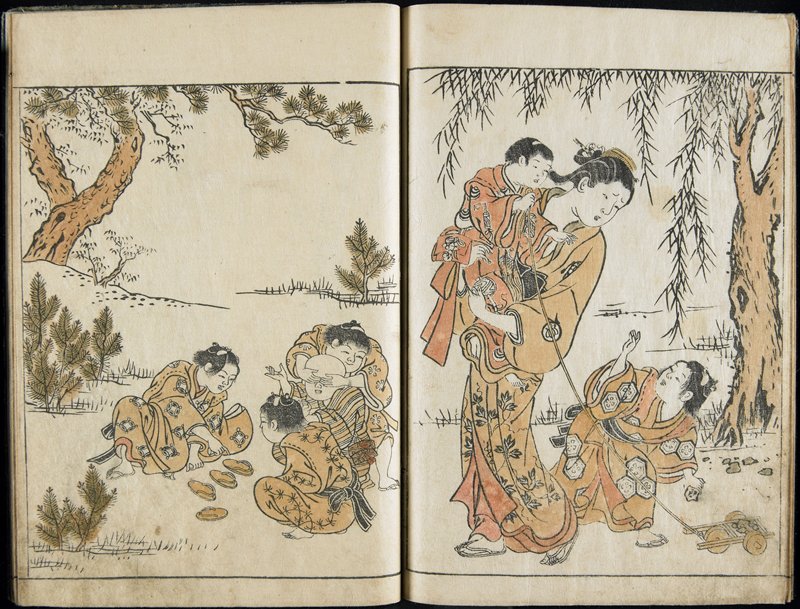 Some images were hand-colored with paints. This one was printed in black ink and then painted with muted colors. Nishikawa Sukenobu (Japanese, 1671-1751), from Picture Book: Field of Vines, 1736 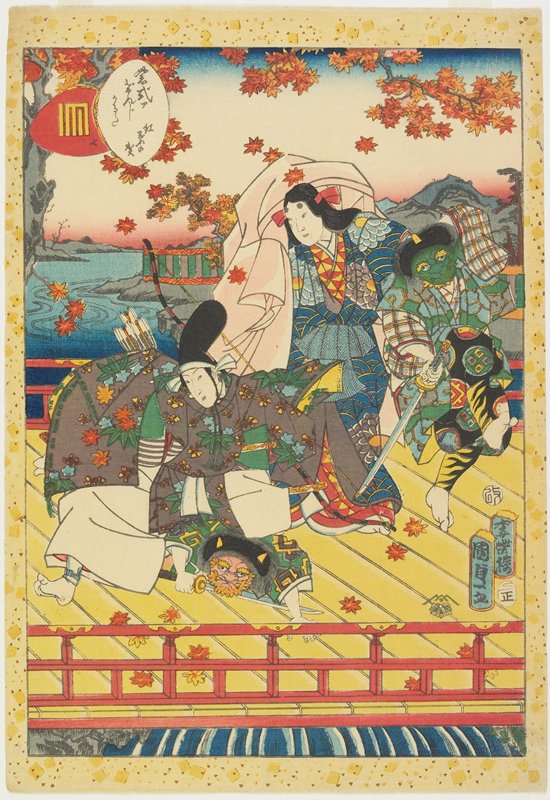 To print this lively scene, a different woodblock was used for each color and one more for the black outline. Pictures printed this way are called nishiki-e (brocade pictures). Utagawa Kunisada (Japanese, 1786-1865), Celebration for the Turning Color of Maple Leaves, 1857

Ukiyo-e prints reveal a lot about how the Japanese enjoyed life during the Edo period. Entertaining activities helped people escape strict government rules, and the attractions of theater, fashion, and nature provided subjects for ukiyo-e artists.

Among the most stylish subjects of ukiyo-e prints was Kabuki theater. In Kabuki plays, male actors performed popular stories. Like today's movie stars, the most famous Kabuki actors were adored. Admirers bought portraits of them in theater roles or relaxing backstage and enjoying life.

Other well-liked ukiyo-e prints were bijin-ga, or pictures of beautiful women. They portrayed stylish and talented women looked up to for their trendsetting fashions and grace. These beauties wore luxurious kimonos (Japanese robes) and had fancy hairstyles. Many Japanese women used the prints as a fashion guide. Educated in music, dance, and poetry, bijin represented the essence of human beauty.

In the late Edo period, when the government began to allow more travel, Japanese landscapes became a favorite ukiyo-e subject. People bought prints of places they visited or places they wished to go. Many of these picturesque views feature Mount Fuji. 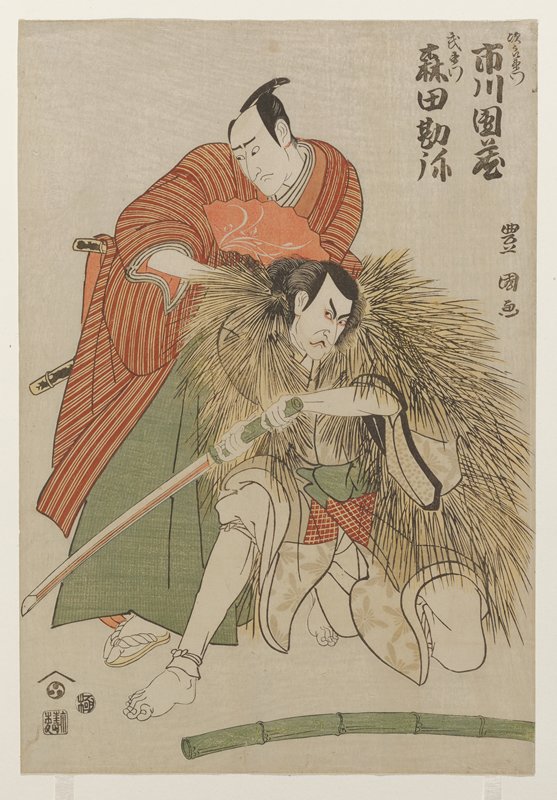 Wearing the latest kimono styles, the beauties depicted in bijin-ga were admired by women hoping to copy the fashions for themselves. Kikugawa Eizan (Japanese, 1787-1867), Woman Holding a Roll of Paper, 19th century 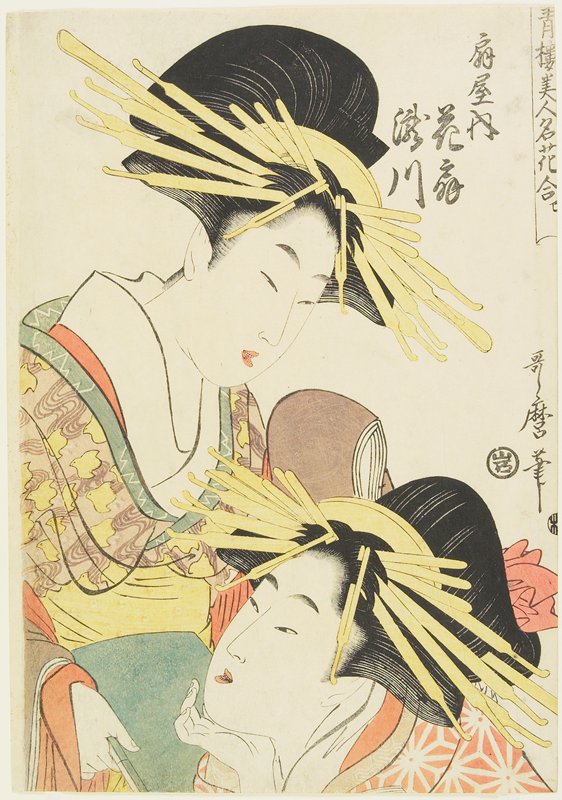 These two women show off their elaborate hairstyles decorated with ornamental hairpins called kanzashi . Kitagawa Utamaro (Japanese, 1753-1806), The Courtesans Hanaogi and Takigawa of the Ogiya House, 1805

A Picture Is Worth 17 Syllables

Select an ukiyo-e print from Mia's website that inspires you. What do you see? How does the picture make you feel? Using the 5-7-5 syllable format explained in the Haiku Worksheet, write a haiku poem about the print.

Discover how prints are made, step by step. Visit the Museum of Modern Art website to see several different print processes, including woodblock. Uncover the answer to “What Is a Print?”.

In groups of three, create prints in ukiyo-e style using printmaking materials and tools. Select a subject for the print by thinking about what you do for entertainment or enjoyment. Have one team member lead each step in the process: drawing, carving, and printing. Take turns practicing each step to see how ukiyo-e prints were made. When all the groups have finished, collect the prints and assemble them into a book for the class to enjoy.

A Tour of the Floating World

Come to Mia to see pictures of the floating world. Because light can damage them, the prints are rotated every ten weeks. So plan to visit often! Want to come as a school group? Use our online tour request form.